Forget a Long List of Resolutions: Think Small Instead

The new year will be arriving in several days, so naturally, I’ve been thinking about resolutions—even though I’ve never been someone who takes the custom too seriously. It’s not that I don’t understand the tradition and its impulse. It’s tempting to tell yourself that after 365 days of the old, a new year is about to bloom, and with it, a chance to begin anew.

When I was younger, I counted on the possibility of starting all over again. At eight or nine years old, I remember feeling so bad about something I had done—though I was a “good girl,” and cannot imagine what sort of behavior on my part might have prompted such dark feelings—that as I lay in bed at night, I would hold my breath and promise that beginning the next morning, I would be a completely new person. A person who never misbehaved or made mistakes or thought unkind thoughts.

What I remember most about this experience, was my belief in the power of wishing so hard that I could make my wish come true. I actually thought that if I closed my eyes and concentrated intensely, my wish to become more golden and purer would be realized.

This desired transformation never happened, of course. My wish was never granted. Nonetheless, for some years, I believed in the possibility. If I just wished hard enough and held my breath long enough, I would be rewarded.

I don’t remember when I abandoned this wishful thinking, but I do know that at some point I realized that effecting the desired transformation required a great deal of work on my part, like practicing the piano or doing my homework each evening. As well, somewhere along the way, I no longer desired to become a perfect person. I suppose I was too busy discovering who I was to continue bothering with who I wasn’t.

Although as I write this, I realize that the wish to become a “better person” never really left me. Not all that many years ago, it returned in my desire to become a kinder, gentler, more compassionate person. Thinking small is, in part, a manifestation of that desire. Preventing myself from becoming overwhelmed and intensely anxious, and as a consequence, feeling more connected with the world and its people, would help me fulfill this ambition.

That’s why I urge any of you planning to make resolutions for the new year to think small. Don’t create a list of qualities or behaviors you resolve to cultivate in 2019. Instead, focus on one such change. For me, I’ve resolved to become less reactive next year. My nervous system seems to have a hair trigger, which makes me not only react quickly and intensely to stimuli–especially negative—but to reply nearly instantly after somebody says or does something that offends me. So, beginning next Tuesday, I’m going to count silently to ten before I even think about voicing my opinion. I’m hoping that instituting this short delay will help calm my nervous system, and eventually teach it not to react so intensely to every stimulus.

So, instead of declaring globally, “I’m going to become a nicer person in 2019,” I’m deciding to count to ten whenever I feel triggered. That’s my way of thinking small. 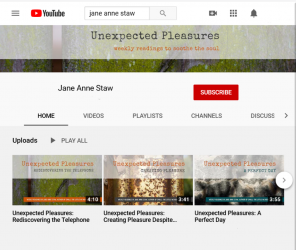